skip to main | skip to sidebar

Two weeks ago, I set out to compete at the Fox Lake Sprint Triathlon with the Four Chris’:

When faced between driving in a van with 3 Chris’ or a luxury sedan with 1 Chris, you choose the sedan for its assortment of high-end features and the fact that as you’re having a conversation, you can say “Chris” and only one man answers.

(though saying one name and commanding the attention of four men is sort of a dream come true, isn’t it?)

Athlete Chris and I headed out to Fort Wayne while the van filled with the other Chris’ trailed behind.  To no one’s surprise, about 2 hours into the trip, we received word from the van that they had missed Route 30 and were somewhere deep in the Indiana cornfields (in their words: deep, like real deep) snaking their way back towards I-69 as they were duped again by my husband’s GPS.

(longstanding joke: if the GPS told my husband to drive straight into Lake Michigan to get to Indiana he would have done so while cursing the GPS for being incorrect yet again)

We arrived in Fort Wayne, picked up our race packets and then grabbed dinner.  The waiter introduced himself as Chris.  One would normally not be concerned about this but seeing how this was now the Fifth Chris and we were deep – like REAL deep – in Indiana surrounded by a Children of the Corn meets Dateline farm roads, I was starting to get worried.

We settled into the hotel where I got into bed at 7:30 pm.  It had been a reckless week of sleep and I was tired.  Temperatures in the upper 90s combined with the new F45-49 normal hot flashes for the last few nights meant there really wasn’t much sleep.

(the best way to describe a hot flash would be similar to how you describe the heat in Kona: open the oven door, stick your head in front of it while someone points a blow dryer at the back of your neck).

Finally, I slept.  Here’s the formula for a great night of pre-race sleep:  pack your own fan to drown out snoring husband and crank the hotel AC down to 60.

The race took place at what can only be described as the junction between Heavy Forest and Mosquito Bites: the Fox Island recreation area.  Storms the night before left the area, shall I say (be warned) moist and swarming with mosquitoes.  In a thoughtful gesture, the Race Director had a table of hand sanitizer and Deep Woods Off.

Quickly it began: the pre-race preparations.  Rack the bike.  Grease up the shoes.  Clean the helmet visor.  Calibrate the power meter.  In my head is a list I’ve run through over 200 times in 20 years to arrive at a state of ready-to-race.  I arrange my belongings on a socially distanced rack with bikes of other athletes here for the same reason: to push, to race, to get it out of our system – the demons, the anxiety, the energy, whatever your reason, you were in the right place.

The swim course was 500 yards and I swam it twice as a warm up.  Probably 4 feet deep, it was a warm bath of midwestern mud and weeds with zero percent clarity.  Of course when the water temperature is 88, there is no need to warm up but I will add that it felt good to stretch out and there were small pockets of the lake I would even call refreshing.

The race start crept up quickly.  We line up in time trial order on the beach.  Somewhat socially distanced but still close enough to listen to the conversations around me.

I’m not going in front.  I’m not a fast swimmer.  I’m not in shape.  STOP IT!   One thing I don’t pack when I go to a race is a list of excuses.  So I lined up in front, knowing I (as usual) had no business being there but at least would get a shot at avoiding the scrum of self-proclaimed out of shape humanity behind me.

While waiting, a young man walks up to the front.  We all know this guy.  What he lacks in self-awareness, he possesses in confidence and blissful naivete.  This is more commonly known as “youth.”  He’s a talker; talking about how he’s going to win, he’s been to sprint Nationals, he’s fast, he was top 5 at the race a few weekends go.  He goes on.  And on.

Moments like these, I find myself sitting in the imaginary rocker in my head, aging, sore and cranky.  It’s my Old Lady Waterstraat Moment.  Shaking my head while muttering something about kids these days.

You people have no idea.  I have wrinkles on my forehead deeper than your race experience and you’re telling ME how YOU are going to win?  Wait, let me grab a bucket from transition and have a seat so I can get in on this lecture.

I smile at the young man and then politely say “Best you get the front of the line, Sparky.”

With that, the race starts.  Time to give it my best.

We go off two at a time, I enter the water with Husband Chris.  Quickly, a large and fast group forms to my left.  I keep my right line.  The swim is fast but I felt great.  Over before I knew it.  Hit the sand and couldn’t believe it – 1:20 pace for a nonwetsuit swim!

The run to transition was about 150 yards.  I picked off an assortment of young women from a local collegiate tri team.  Transitioned a little too long and then got on my bike.

The first few minutes were a no aerobars zones as we snaked our way through the wet roads of the forest exit before arriving at the main bike route.  It was a fairly straightforward, flat and fast ride.  My quads burned, I cursed my bike (we are in a complicated, strained relationship) and otherwise pushed the best I could.  In the final mile, I spotted the final woman ahead of me to catch – one of the collegiate athletes.

I transitioned as quickly as possible and got to running.  Another run course with gravel, grass, mud and roads.  I went chasing as hard as I could, wheezing, working.  When the first mile popped up at 6:55 I thought to myself THIS is what a 6:55 pace feels like these days?  THIS!??  It’s like 6:55 with a real feel of 6:15 – it just doesn’t get any easier these days!

By the turnaround, the collegiate girl was about a minute ahead of me.  I uttered some motivational words to each of the Chris’ – thumbs up!  Keep it going!  Get after it!  Through the finish line!  (in times like this I am really just engaging in a socially acceptable form of talking outloud to myself) By mile 2 I realized I had met my goal of beating 50 percent of the Chris’.  Meanwhile there were a few women running strong behind me and because of the time trial start I couldn’t let up.

The finish line.  A feeling that never gets old or more like that feeling of – I’m done, now I want ice cream and I don’t care if it’s only 9 am.  I finished 2nd overall with the collegiate gal in first a little over a minute ahead.  And then – the post race recaps.  Where we unabashedly indulge in our experience – recounting the personal highs, the lows, the struggles, the triumphs.  And, in the case of Friend Chris, sharing his “story of mediocrity” (in his words, it’s not easy coming in at 69th place!).

In under 24 hours, I arrived back home and within 10 minutes start a load of laundry, empty the dishwasher, break up the fight between kid #2 and kid #3, start dinner, read the mail, etc.  And that brings me back to why we are scrapping together this 2020 race season.  Because for 24 hours, I get to be a version of myself that doesn’t often get expressed – free, focused, competitive, no stops towards a finish line.

On to the next race! 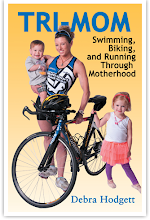 (wrote a few chapters for this book!)